vSphere 6.7 supports one of the exciting technologies on computer memory i.e. Non-Volatile Memory (NVM) or persistent memory (PMem).  In this post my focus is on briefing what is PMem technology and explore how DRS works with PMem configured VMs.

What is Persistent Memory (PMem)?

In brief, PMem is next generation memory technology whose data transfer speed is as good as DRAM (50-300 ns, 100 times faster than SSDs) and unlike DRAM, it can even retain the data after reboots .  If you ask me, it is going to greatly improve the performance of applications running performance sensitive workloads  ex. analytics and acceleration databases etc. The virtual machines, which require low latency, high bandwidth and at the same time persistence are right workloads to be benefited from this technology.

Below diagram highlights the 2 modes supported by vSphere.

ii) Virtual Disk mode (vPMemdisk): This works with legacy/traditional VMs, no requirement of having hw version 14 and VM need not to be PMem aware.

If you want to understand more about PMem technology , I would recommend you to watch this youtube presentation by VMware’s CTO Richard B.

First of all, I deployed one quick lab setup: 1 vCenter, 3 ESXi hosts and simulated PMem on 2 out of 3 hosts. All these 3 hosts are inside the DRS enabled cluster. Since I do not have any PMem aware VMs, I explored PMem in vPMemdisk mode i.e. Virtual Disk Mode pointed above

Note: I did simulate PMem on  2 hosts  using a cool hack provided by engineering i.e. by running this esxcli command “esxcli system settings kernel set -s fakePmemPct -v 33”. Note that simulation must be used for lab or educational purposes only. William has written a nice article on the same as well.

Now that we have required PMem simulated hosts, lets start exploring how DRS works with PMem. Since I did not have any PMem aware guest, as I said earlier, I explored PMem with DRS in virtual disk mode described above i.e. vPMemDisk, which works fine for legacy guest OSes. Below are my observations on the same.

I created a VM with PMem of size 512 MB on DRS cluster. Below screenshot shows how PMem can be selected as storage. 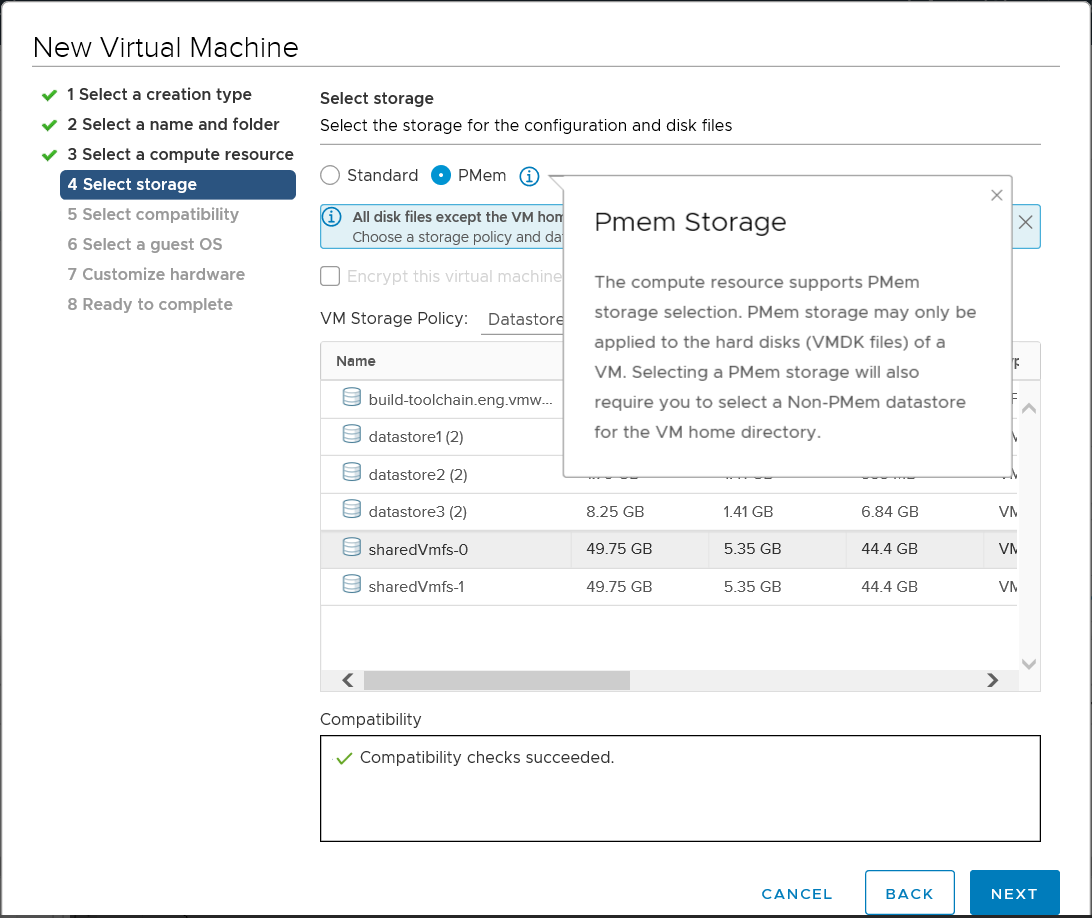 Below screenshot shows how PMem storage policy comes into picture. This policy gets selected automatically once you select “PMem” as shown above. 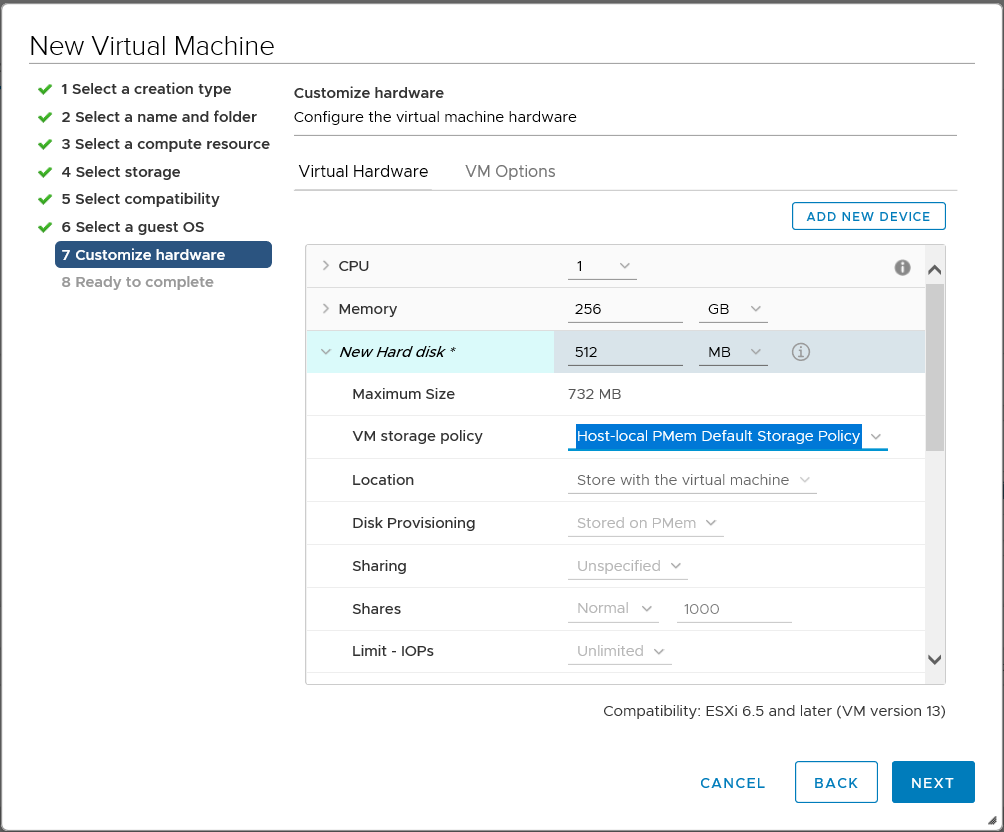 Now lets take a look at the VM summary. 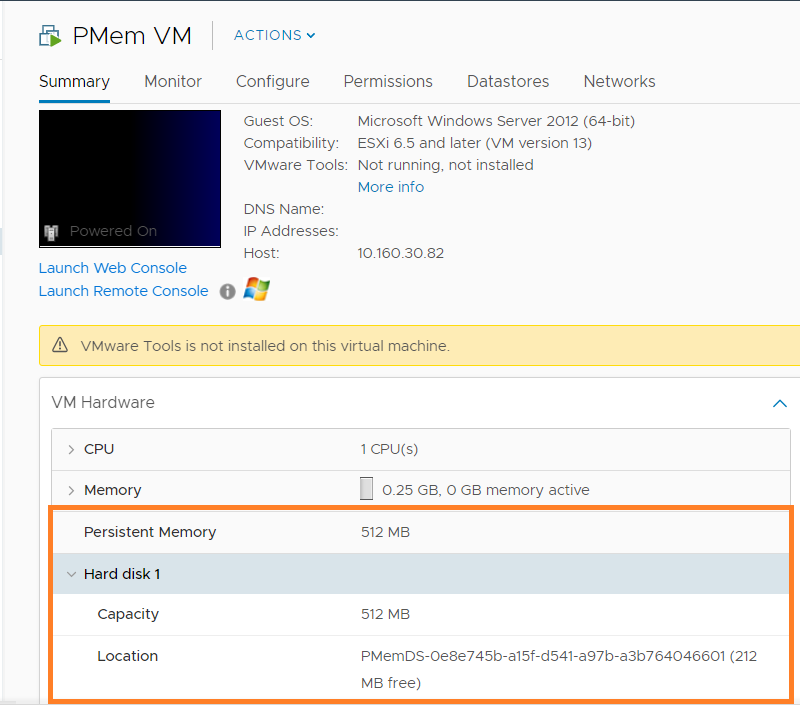 I could not explore more on DRS load balancing with PMem VMs but what I have observed is that DRS prefers recommending non-PMem migrations more overs PMem VM migrations. If it is absolutely needed, only then DRS recommends PMem VM migration to other compatible hosts.

I hope you enjoyed this post. Please stay tuned for my another blog post on PMem, where I will discuss about creating PMem VMs using API.